Out of nowhere, Nintendo shouts “SURPRISE!!!” to the internet and releases Metroid Prime: Blast Ball onto the eShop free of charge. I bet if I was a Metroid fan, I would be going “Oh wow, they are so desperate to sell these games that they are making one of them free.” The problem is I’m not, and therefore I have seen that these games are clearly spinoffs made by Next Level Games (who has no history with the series prior to this). Guys, come on now. If this was actually supposed to be a full-on Metroid Prime sequel by Retro Studios, much like how the Sticker Star games effectively replaced the Paper Mario series and tore its name apart, then I’d understand all the anger over the past number of months.

I will say, I never understood why this game is called Metroid Prime: Blast Ball. What the crap does any of this have to do with Metroid, let alone Prime? The closest thing this has in common with the series is that both games take place in space, I guess. Even then, the field is enclosed within a dome. So even when accounted for, that tidbit only goes so far. Oh well. To be fair, as far as the chibi-like visuals go, this game’s graphics are fairly above-average and do a fine job of conveying the feeling of outer space. You’re going to see a LOT of blue and yellow, though; the field is divided into those two colors, and there’s no other field in the game. Hope you like those colors if you intend to play this a lot!

Blast Ball’s music consists of the typical orchestrated getup, because space. More often than not, I wouldn’t be able to get to hear it due to the constant sound effect cluster that occurs during this glorified take on soccer. There are lots of blasts firing and buzzes from the shots hitting the ball, and occasionally there’s an explosion noise when a person dies or a goal sound when a team scores. The game is at least full of activity, but none of the sounds are anything that stick out from the usual first-person shooter crowd. 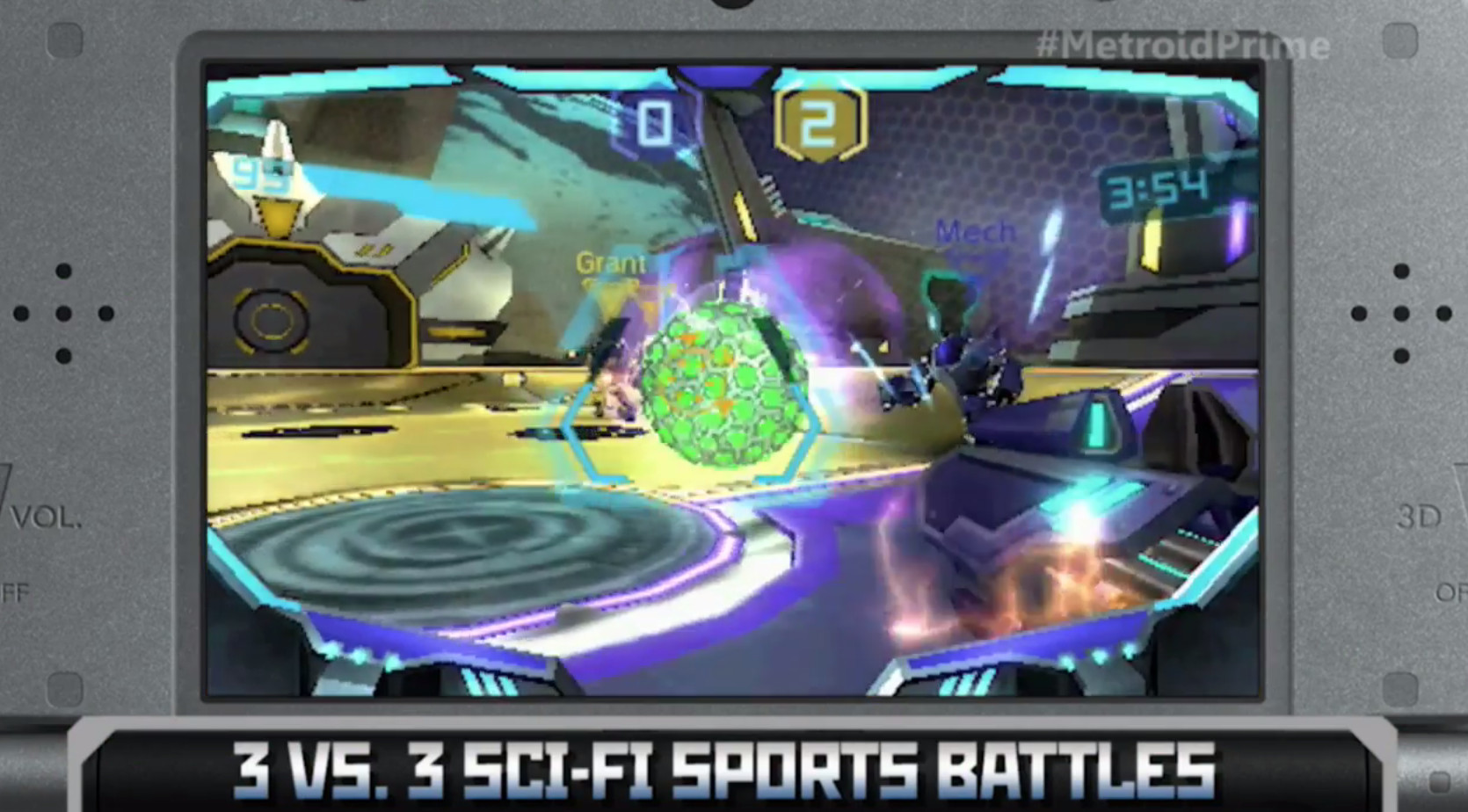 Apparently, in the future, soccer will be played with blasters instead of regular human feet. I suppose it sounds cool, but I think I rather prefer if soccer was played with cars. Both premises can take getting used to when trying to be in control, but at least I was then able to actually hit the ball with direct contact from my vehicle. Firing repeatedly at the colossal orb just doesn’t feel as practical. Muscle memory gets me to move close to the ball in vain that I might influence its direction physically, but the ball is dangerous to touch and therefore kills people. Players respawn after watching a sequence of their armor being blown up (while the match is going on, no less) at least, and lives are infinite in this case.

Of course, the real and possibly only reason anybody will ever download this game is to play the online modes. Those servers will switch over to the retail release of Federation Force, so I suppose it’s fair enough to act quickly. It’s just a bit of a shame the modes are hardly different from each other; one mode has you play with other people, while another pits you and a couple others against AI opponents. If you don’t care about real people, then nothing of value is lost when the servers switch over, as solo game modes consist of these types as well. There is quite some potential to be had with soccer play mechanics, so I can’t help but feel underwhelmed playing only on the same map with the same setup. It’s like playing a Super Smash Bros. game where players only play as Fox on Final Destination.

Okay, not really. Smash Bros. would still be totally focused on skilled play while Blast Ball strives on a more mindless form of entertainment. After all, there are power-ups that can be used to an almost unfair degree. The most notable is where the entire trio of opponents can briefly be ejected from their armor, forcing their time to be wasted getting back in their mechs while the other team has an advantage. It’s almost Mario Party-like, which can be good or bad depending on your taste in multiplayer games.

I was probably being too harsh with my gameplay notions. This certainly isn’t a bad game; the control is like that of an actual FPS, and there is an arcade kind of vibe extracted from this take on the classic sport (even if I still find Rocket League more intuitive). It’s a mini-game for something that could be bigger, and perhaps something that could be more related to Metroid Prime. This game could have used plenty of improvement, but it’s worthy enough to be a distraction for a few rounds, with or without online play.

Both Ultimate Alliance Games are Coming Next Week