My last Top 5 was obviously kind of on the negative side of things, what with it being focused on disappointments in the Nintendo Wii library. But of course I wouldn’t want to seem like a Negative Nancy that only pounces on the bad side of the Big N, so here is a list that is more positive. For this one, I’ll be looking at some games on the console that not many people have picked up during their times on store shelves. If you’re curious enough, however, you might just find some merit within these overlooked titles. Why not just a regular Top 5 Wii Games list? Because everybody knows Super Mario Galaxy is the best game on the console!

Hello, reader. My name is Ryan Silberman, and this is my fourth Top 5 list! 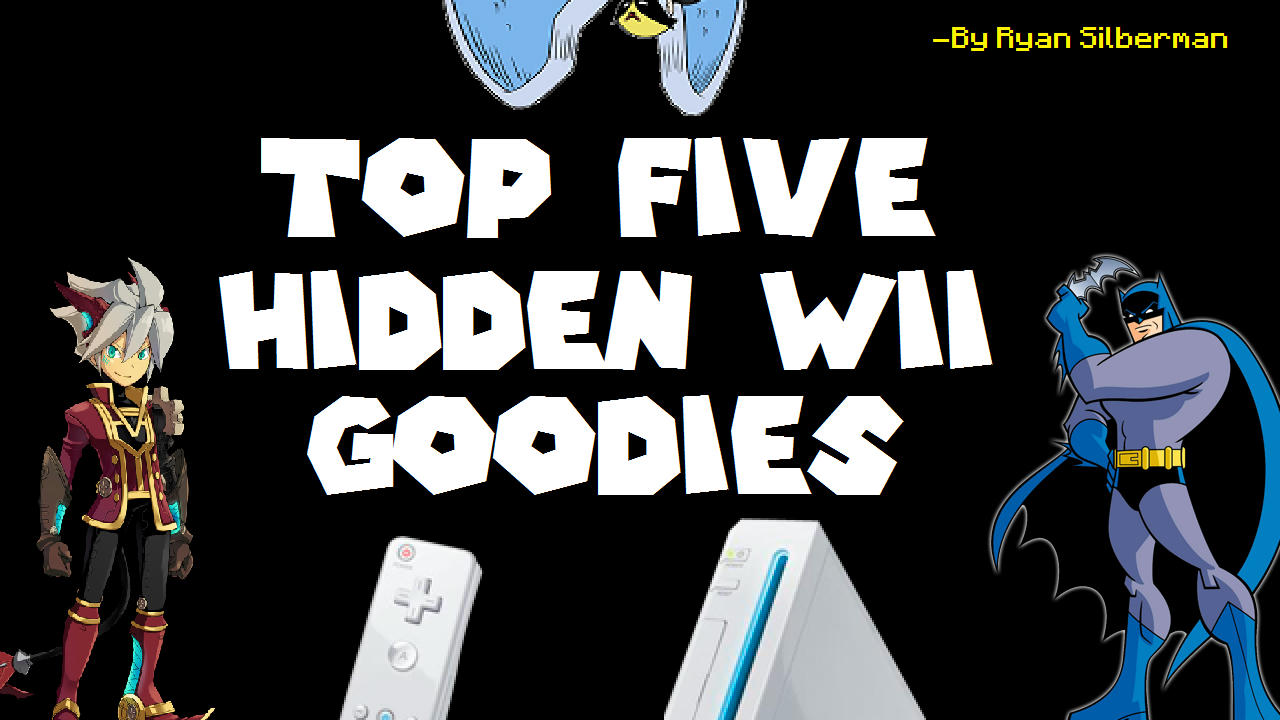 It’s no secret that the Caped Crusader has lent his name to loads of games since the NES era, but even though Batman: Arkham Asylum stole the spotlight being critically acclaimed as it was, Wayforward took the opportunity to deliver a more oldschool approach for Batman: The Brave and the Bold the Wii.

This two-player co-op slam-fest plays a lot like the indie game, Guacamelee, only more streamlined and with reduced difficulty. Nevertheless, it’s a very polished beat ’em up. The combat is ultimately satisfying, especially when attempting to pull off combos, and the animated art style and voice acting are pleasantly faithful to the Cartoon Network show the game is based on.

Do you love Japanese games?

If so, then you’ll find yourself adoring Domino Rally if just for its immense charm alone.

Known as Minon: Everyday Hero in Japan, Domino Rally is a game starring a superhero that uses humongous dominoes as a means to travel in order to resolve a situation as small as saving a kitten from a tree or keeping a pop star’s fans engaged. The gameplay is also rather simplistic; the Wii Remote is used to point at the screen (sometimes for changing direction), with the B button spawning domino rows, and shaking motions used to increase Minon’s speed.

It’s nothing big by any means, but it’s totally serviceable mechanics that give the game an arcade-style feel, and what else there is of Domino Rally is certainly something to behold. The cutscenes are humorously corny, the localization is minimal at best, and the game doesn’t last too long…But dang it! It’s hard to not smile with it, and when it comes to the music, it’s hard to not dance with it either!

So yeah – If it looks interesting to you, that could be because it is.

This might be a more familiar name if you’ve ever watched Adult Swim during the mid-2000’s. For those that don’t know, the nightly programming block once utilized some of Hanna-Barbera’s 1960’s superheroes by placing them into lower careers like a talk-show host and, in Harvey Birdman’s case, a defense attorney. Before Adult Swim’s games division would strive to create titles not related to their shows, High Voltage Software and Capcom would cooperate with the nightly network to develop a Wii (and Playstation 2 and PSP) game based on good ol’ Harvey.

Luckily for us, Capcom happened to have a certain attorney-based series of its own for this game to be inspired by.

Although no one ever yells “OBJECTION!” in court, Harvey Birdman: Attorney at Law has its own winning blend of sharp and silly humor. Much like Phoenix Wright, this is a point ‘n click game with an amount of cases to solve and settle in court. The difference is that this isn’t on the Nintendo DS or Game Boy Advance, and much of the game consists of cutscenes that are reminiscent of the TV show it’s based on, complete with most of the original voice cast and bizarre animation style.

If you thought the several-months-long delay of Rayman Legends was bad, then you likely haven’t heard about what this game went through! Originally meant for a 2011 release, Rodea the Sky Soldier was created by Yuji Naka’s development team, Prope. However, the game’s publisher had another development team work on a Nintendo 3DS version initially without Prope’s knowledge. The new version was taking so freakishly long that they then decided to port it to the Wii U as well, with the original Wii game being held hostage until it was bundled with the former at long last when the versions were finally released as late as 2015! Yes, that makes this the last non-Just Dance game to ever grace the Wii. And contrary to the Wii U and 3DS counterparts, it’s actually pretty darn good.

Despite that the game is controlled entirely with the Wii Remote, it actually takes good advantage of the shake motions and button presses distinctively. You point where you want to fly to, press B to lock on to that point, to shake to take off, and hold A and shake to attack. Other than that the camera is controlled by pointing all the way to the left or right of the screen, this game plays much like a savory combination of a solid 3D Sonic game with a hint of Nights. The SEGA feel extends to the sometimes cringeworthy writing/voice acting, but gameplay-wise, you’re bound to feel like it’s 2001 again. The gorgeous Dreamcast-like visuals (which are ironically superior to the 3DS and Wii U versions’) and commendable soundtrack help sweeten the deal as well.

Here’s a lesson anybody should learn: The price of a used game doesn’t determine the game’s quality. Case in point is one day when I stumbled upon this game at Gamestop. This title was as low as $0.99, which seemed like it meant that the game was a disaster waiting to happen. Turns out that was one of the best dollars I’ve ever spent on a game.

This game is a pure arcade-puzzler-esque title, and an intriguing one at that. Controlling a blob of mercury, you must navigate through the cleverly designed mazes whilst possibly splitting the blob up, changing its color, or whatever else is necessary to slither to the goal. There’s a great variety of obstacles that make up the designs of the many, many levels to play through.

The levels themselves can provoke thought, test skills, and even sometimes keep things at a relaxed pace. The equally pleasing graphics and sound give off a vibe that reminds me a lot of the PC/Mac gem, Marble Blast Gold. For a dollar, this game could only be worth every penny.