Issue 144 of The Walking Dead had the whole community talking. Everybody was shocked by what Alpha had done. We didn’t know how everybody would take it, and what it meant for our survivors. Is book 13 better than 144 ?  ( This review of The Walking Dead Book 13 contains Spoilers!) 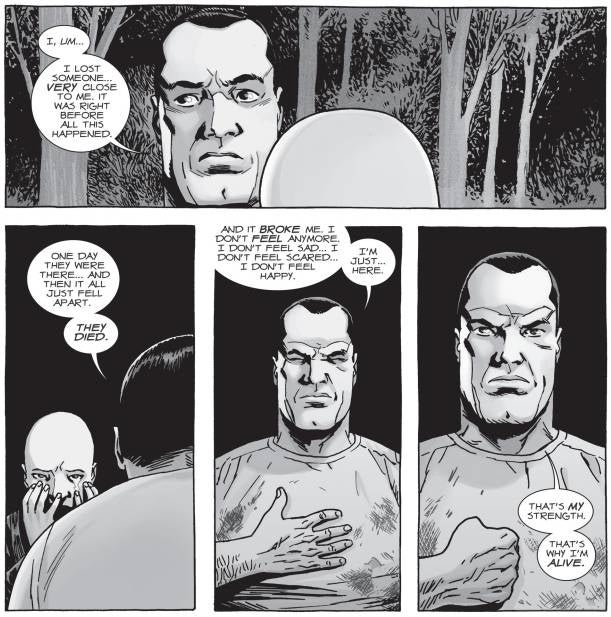 For the sake of saving time instead of giving you lovely ladies and gentlemen a detail description of the first issue of The Walking Dead Book 13. I will provide you with the synopsis of the volume that can be found on Amazon.com or Comixology.

The Walking Dead Book 13 collects issues # 145-156. The writer of this book is Robert Kirkman, and the artists is Charlie Adlard and Stefano Gaudiano.

Rick reveals the survivors who died at the hands of Alpha and the Whisperers. Residents of the communities demand retaliation and some question Rick’s leadership. Rick declares war on the Whisperers and must use a former enemy as a last resort. With the conflict against the Whisperers closing in, Rick must ensure the readiness of the community’s newly formed militia while also dealing with various conflicts within the walls of each community, including the escape of a dangerous prisoner.

First, let me say how much I love this book. They are so many things that happen. It consist of two story arcs, No Going Back and A Call To Arms. In No Going Back, we see Rick tell the communities about the border, and we see peoples’ reactions. Rick’s people turned on him after they heard the news. I really enjoyed this development, because we never saw this happened in The Walking Dead Comic Universe like this. Rick comes up a plan to form a Army.

After # 150 ,we start A Call To Arms story arc which lasts from #151 to #156. We see all hell break loose. The arc rockets off with Negan being busted out of prison by Brandon (We all know what happened to Brandon. and I think we can all agree that it was awesome). Negan joins the Whispers to prove something to Rick. Eventually we get to the end of #156, and holy crap I didn’t see that coming. I mean I thought that he might do something like this, but the matter in which he did it. It was just AWESOME! This book might even top book 3 for me.

Rick- In #145-150, Rick is like a weak old man. I mean that in a sense that when he gets in a brawl, he generally gets the shit beat out of him. He is a good leader but he isn’t a fighter any more, and in #151 we see that only can Rick not fight, but his aim is way off too. Not all of Rick’s character progression is bad; he manages to control the outrage from his people in Alexandria and make them safe.

Michonne – Michonne took the border the hardest, because she had just for given herself for abandoning her children. She finally found someone that made her truly happy and she left him. Then when she finally comes back for him, he’s dead. So in this book we see her work through her grief.

Negan- Negan’s character development doesn’t kick off until A Call to Arms. He is a character that always seems to surprise the heck out you by his actions. You think you know his characteristics and motivations, and than he does something or says something that changes how you see him. So in 156, like Alpha, Negan opens up to Alpha to state how everything  he did and everything he will do is for the greater good in his eyes.

You tell me that I have to crush a field of babies to keep breathing? Sure.  You say the people that rely on me aren’t going to live unless I turn someone’s head into a bowl of gravy? I’m there. I don’t feel bad about it. I don’t think about it. It is what it is. It’s Survival.

Alpha- Alpha is like a superhero; she always a wear mask and she rarely takes it off. She claims to be ruthless leader with no emotions and a clear set of rule for her community. For the most part, she stays in that element, until we get issues 148 and 156. In issue 156, we actually see Alpha open up to Negan and reveal how she truly feel about herself and Lydia.

My rules… my strength… they keep this place together. I have to be strong for them. I let them… have my daughter I though it make her stronger… I thought there was no other way to live in this world… I… I miss her so much… I’m not strong… I’m not.

Honorable Mentions – Andrea, Carl, Lydia, Paul, Aaron, and Maggie are present throughout # 145-155, but they are mainly just sideline.  (Maggie had a big presence in Issue 146, but she didn’t have any character development.)

The art in these 12 issues is excellent and well drawn. Each panel helps accelerate the story. For example, look at the image above this from The Walking Dead #145. In the first panel, you can see Michoone tackles Lydia in blind rage. The next panel shows Michonne screaming at Lydia at the top of her lungs, spit foaming out of her mouth. Confusion and pity is plaster on Lydia’s face and as she reacts to Michonne’s assault. That is one of the things that Charlie Adlard does well; he is really good at drawing character’s facial expressions and character interactions.

Where can I get it?

If you want a digital copy be sure to merge your Amazon & Comixology accounts. After you do that, buy it using the Kindle app and then you will have it available in both places.

Both Ultimate Alliance Games are Coming Next Week