If you’ve heard the name “Matthew Taranto” before then you must be a fan of his Brawl in the Family webcomic series. I know I certainly am, so I was one with that crowd when it was announced Tadpole Treble would be Matt’s (and his brother Michael’s) direct entry into the development part of the industry. It doesn’t have Kirby eating something funny or comedic shots of Solid Snake’s butt or Waluigi’s horrendously drawn face. However, what it does have appeals to my love for cartoons and music in a truly mesmerizing manner.

Given how adorable the Brawl in the Family comics look, it’s no surprise that the Tarantos would deliver a similarly charming original world.  What makes Tadpole’s presentation stand out is just how kinetic and synchronized the action is. It almost felt like I was playing through a cartoon musical; there are events that would time themselves with the music. The backgrounds are fully loaded with animation and scenery. Tadpole Treble is the most visually interesting game since the day Parappa the Rapper birthed the modern conventions for a rhythm game. 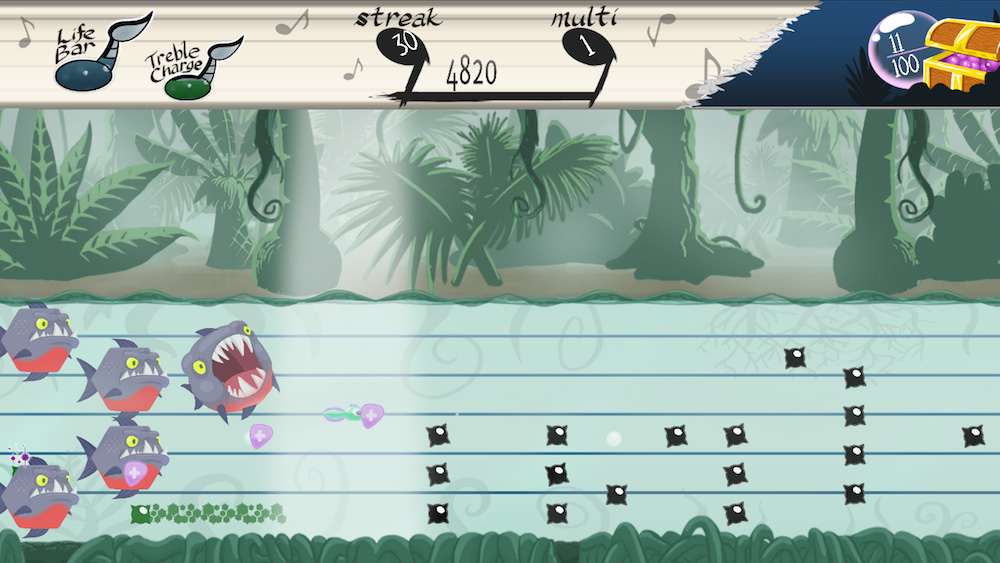 Oh…my…God. This soundtrack. THIS soundtrack! It partially seems to be there to complement the stylistic gameplay, providing melodies that people could hop on board with. It’s not a bad thing by any means, since the general compositions fit the concept like a glove. However the highlights of the soundtrack come around when the music goes above and beyond to be as diverse and catchy as it could. Each level has a unique piece, and the instrumentals can range from piano melodies to drums and bass to full-on lyrics!

The music is in complete control of what goes on in the game, and players have no choice but to go with the flow. Because they’ll be having fun anyway. If anything, there is one level that (while the song is still solid) has a portion in which the mood changes rather abruptly. It kind of makes the song lose its momentum the tone had prior to the moment it changed. Other than that one nitpick the audio is an A+ in my book.

The gameplay is easy to grasp. As the plucky little tadpole, you move up and down to avoid the black notes and instead collect the purple bubbles. Sometimes you’d need to whip your tail at particular timings for extra points or to keep away from certain level-specific dangers. While rhythm games often rely on the music to be the basis for mechanics revolving around matching button presses, Tadpole Treble‘s gameplay is pretty much in the music’s hands. It’s fun to keep at the given pace and collect the bubbles as they are synced with the background piece. The graphics also come in to play in the form of surrounding animated animals serving as unique gameplay obstacles. There is life created through the musical gameplay and it does a darn great job at embracing it.

You too can embrace the lively musical cartoon vibes as well via the game’s Composition mode.  You can even make your own levels! And since this is a music game, that means you can make your own songs and share them with others. This is where the game’s inspiration from Mario Paint becomes a lot more evident. That’s because the music creation is intuitive and fun, much like Tadpole Treble‘s own levels. The tools are easy to learn, and the results are ultimately effective.

Guys, I freaking love this game. Heart and soul is visibly poured into every detail of Tadpole Treble and all I can really think to do is obsess about those details. It’s like my interests in music and cartoons had a night out and partied at a multimedia theater. As much as I’d want to dish out a couple nitpicks (which I just barely managed to do), I have had too much fun mentally dancing along and playing through the game to care. Seamlessly synchronized and filled to the brim with charm and personality, Tadpole Treble is unquestionably a must-have for your Wii U. I can’t wait to see what else the Super Taranto Bros. will come up with in the distant future.

Review - No Man's Sky - It May Not Be For Everyone