I’ve finally gotten myself a Playstation Vita for the sole purpose of diving into the batches of mostly indie games on PSN – and perhaps some physical copies of console ports. That isn’t to say that Type:Rider is a game that was exclusively designed for the system, though, as it did release on Steam and smartphones prior to now. Either way, this is my first title for the thing, so good on you, BulkyPix! 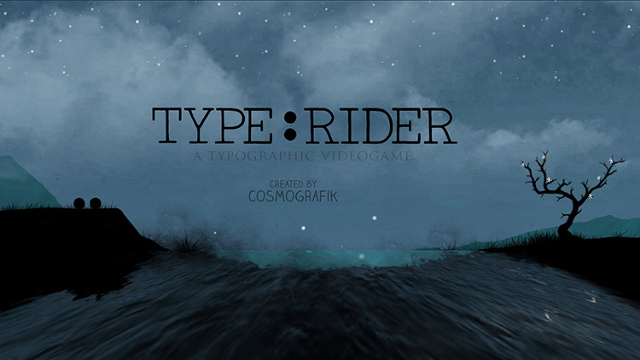 The interesting thing about Type:Rider is that it’s part physics-based platformer, part history lesson. Well okay, the term “interesting” can actually be rather debatable, as the subject matter in question is the timeline and evolution of typography and fonts. The presentation of it is top-notch without a doubt, but the way the story/timeline is explicitly told is by means of accessing in-game book pages. You have to go out of your way to read real bits of history to understand what’s going on within the context of the presentation. I personally think it would have worked better if there were lines of the text in the stages themselves as the player progresses, much like how the narration is seen in Thomas Was Alone. As is, you can only get the most out of the game if you’re one willing to read the history. This is where I end up not being drawn in all the way: I tire of history quickly, as much as I appreciate it.

Regardless of your stance on history, the graphics are undeniably fascinating to look at! The minimalist style of object graphics reminded me of games like Star Sky and Limbo. However, the distinctively varied backgrounds that are themed around respective time periods add tons of punch to the visuals overall – all while the game maintains a super-solid 60 frames-per-second too! If there’s anything wrong here, it’s that on very rare occasions, there can be framerate hiccups. Although one puzzle in particular, for whatever reason, had glaring slowdown. Thankfully, the game is otherwise a beautiful, interactive work of art.

Likewise, the game has a calm, peaceful soundtrack. It’s not much I can elaborate on but it suits the mood of the game as a whole very well and is arguably as important of an asset to the presentation as the graphics.

Type:Rider is a physics-based platformer that sometimes like to throw some puzzles in there to keep you on your toes. Other than that, the game is a fairly cozy ride the whole way through, with exceptions lying around in later stages. You guide a pair of circles (which I believe are meant to be an accent mark) from the start of the stage to the end, like any linear platformer. The difference is how the physics are used to interact with the letters and other things that make up the environment.

I do like the resulting gameplay for the most part, especially with the additions of wall jumping and neat surprises that happen in some of the levels. However at the same time, I feel like it could use more challenge to spice things up. Thankfully there are Speed Run and Leaderboard opportunities, which does help considering the main story mode can last under a couple hours for experienced players.

As it seems, the game is best enjoyed by gamers of the casual crowd that are willing to dive into a portion of history that revolves around how typography has been used and formed throughout the centuries covered. There is quite a lot to like about the game for sure; the graphics and sound are equally gorgeous, and the physics-based play can be quite appealing. However, for those not into history or the easygoing nature of the game’s stages, you may have to pass up on this one.

For those that do, however, don’t let the score make you think this is only “good”. Heck, if it sounds right up your alley, you can even feel free to add a full point higher to my rating or something. This is just my silly personal opinion. While I personally don’t like having to read about history, I do admire the effort poured into this game.

Ghostbusters 2016: Definitely The Worst Thing To Happen To Us Ever, Confirmed.