I love it when I get to review a retro-esque game for the Nintendo 3DS. There’s something about a good throwback that brings out a welcoming attitude. Ninja Smasher in particular is a game that was originally released on iOS devices long before it hit the eShop, but if you were to ask me, I say Nintendo’s current-gen handheld is a perfect fit for this kind of experience. After all, the game thrives on exploration, as the map wisely placed on the top screen can indicate. Normally, I’d run from any game that encourages the “Metroidvania” label (which is why I wasn’t the one who reviewed Song of the Deep), but Ninja Smasher managed to make the in-game universe small enough so it’s not possible to get lost in it. That alone is a big plus from this writer!

The visual style is explicit and to the point on what it wants to be. I know some sprite artists that will say “Wow, these graphics are pretty bad” or “The style doesn’t look cohesive and seems kinda lazy”, but those kinds of people are very picky. I am a lot closer to an ordinary gamer who just wants to play the game and not analyze if a couple pixels are off or freak out if the game doesn’t run in 60 frames-per-second on my computer. The way I see it is that these graphics are nice, clean, and retro. If anything, it does have a few slowdown issues that occur when too much action happens onscreen. It’s odd to me because the Nintendo 3DS is clearly not an NES; it can handle much more than this.

For the most part, the audio is as complementary as to be expected. I actually am quite fond of the soundtrack and punchy sound effects the game packs. My only problem here is that the overworld music plays through too much of the game. The only times the game will switch music is if the player goes into a cave or dungeon; everywhere else has the overworld music and it can be unnerving when searching around for a long time.

And of course, this is where the magic happens! This game is a platformer featuring a ninja. Throughout the game, the player gets to feel like a ninja and explore around the various lands to find ways to enter dungeons and defeat bosses. There are all sorts of ninja powers to obtain and ninja weapons to throw at enemies. The player will eventually be able to wall jump, clasp ceilings, use fire and water powers, and slice and dice baddies with his or her trusty sword! As I already mentioned, the fact that this is a Metroidvania-style title yet I haven’t gotten overwhelmed from looking around in areas is something I feel I should applaud the developers for.

The journey itself is also commendable since the game controls much like a dream. There is plenty to be held at the player’s grasp, but they could all be used with ease thanks to the accessible button mapping. Switching weapons is done by pressing L or R, Y is to use that weapon, B is to do a standard sword attack, and A is to jump. I honestly have no clue why this was never on a game system with physical buttons until now! But now that it is, it plays greatly. The platforming is tight, and it always feels so good to slash things with my sword. I’ve more-or-less used the other weapons for situational purposes, such as when I have no choice but to light a candle with my fire ability, but I do appreciate the option to use them for more practical purposes. 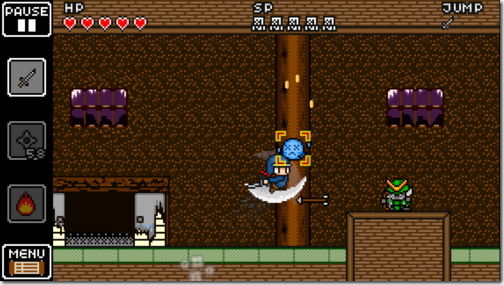 Along with the action-packed gameplay, the world itself is surprisingly memorable. I mean, the game isn’t there to establish character or anything like that. However, part of why I was able to maneuver comfortably through the game is because the lands and areas within have differentiated aesthetics and subtle design aspects that allow me to be familiar with them. I can exit out of one land and go to the next without eventually getting confused regarding if I’ve been someplace before. Also, the level design itself can have fun moments that allow for players to take advantage of the ninja abilities. There are plenty of areas that hold hidden goodies, and the game has its own achievement system should players want more replay value to hold onto.

Overall, Ninja Smasher gets a solid recommendation. Even though I wish there was more variety in the game’s soundtrack, I had been having too much fun with the frantic swordplay to care. If you’re craving a retro-esque platformer on the 3DS as of late, I think Ninja Smasher has just what you desire.

Star Trek Beyond is King of the Box Office