Originally released on computers and mobile devices, Orange Pixel’s (who you may know for Meganoid, Stardash, and Heroes of Loot) action-packed platform-shooter, Gunslugs, paves its way to the Nintendo 3DS by popular demand of those that appreciated the release of its sequel on the handheld. I personally have not played the series prior to now, but I have thoroughly enjoyed Meganoid and Meganoid 2 on my Android tablet, so I was bound to get some enjoyment from this as well. 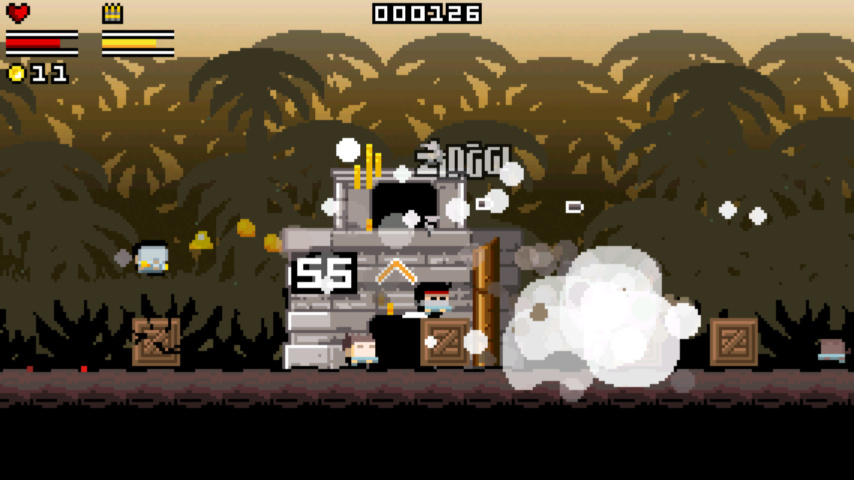 This is the same kind of visual style that brought me into Orange Pixel’s work once before, and there’s a reason why: crispy retro-esque visuals like these never cease to please me. The graphics are simplistic, but stylistic and ultimately chaotic when gun fire spreads across the screen from both sides!

Naturally, a game as hectic as this could use an equally upbeat soundtrack and that’s what the music in this case proceeds to deliver. There isn’t exactly anything that would end up remaining bouncing in one’s head for days after play, but the tunes get the job done and are catchy while they last anyhow. 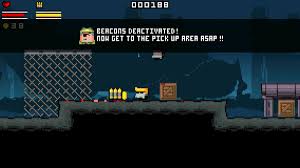 Of course, the meat of the game is its action and there’s plenty of it. In fact, the Nintendo 3DS is arguably the best kind of platform a game like this could be suited for thanks to the pick-up-and-play feel of it all. This is a platform-shooter affair in perhaps the finest degree. The fire button can be held down so your character can keep rapidly shooting, but you do have a limit to your ammo count so it isn’t like you could hold right and fire to win. In fact, this game is hard.

If there’s one thing this game boasts, it’s the idea of an 80’s arcade-style shooter not unlike that of Contra or Metal Slug. While the game has its addictive qualities and surprisingly effective random terrain generation, I feel like the package is hurt by the fact that there’s no save feature. I get the arcade intentions it wants to convey, right down to the emphasis on getting a high score. But this day and age, it’s simply archaic to have a level-based game without a save function and frustrating when I want to try and get to the end. You have a health bar at least, but when that’s fully drained out, it’s over.

If you’re the die-hard kind of gamer that welcomes the steep challenge, then this game will fit your 3DS like a glove. For players that wish to play through the game until it’s beat, however, this is a tough recommendation. It’s far from a bad game; heck, it’s a very good game, but it could have been GREAT had it just had a save (or even continue now that I think about it) feature so I could pick up where I left off.