Riddle me this: Is there any person ever that hasn’t heard of Monopoly? The classic board game has invaded everybody’s homes several times on an annual basis! There are so many editions of Monopoly on store shelves with just about every television, movie, and probably even video game property that’s ever existed! Hasbro and the Parker Brothers must have seriously been swimming in a money bin as huge as Scrooge McDuck’s for all these years. Yet, they still lent approval to developers that were willing to make video game versions of Monopoly. Just like the overabundance of editions, there’s a game of Monopoly on just about every console, even going as far as to have a primitive electronic handheld version!

But out of all of these, which one pats me directly on the heart most?

Why, the Windows 95 version, of course. 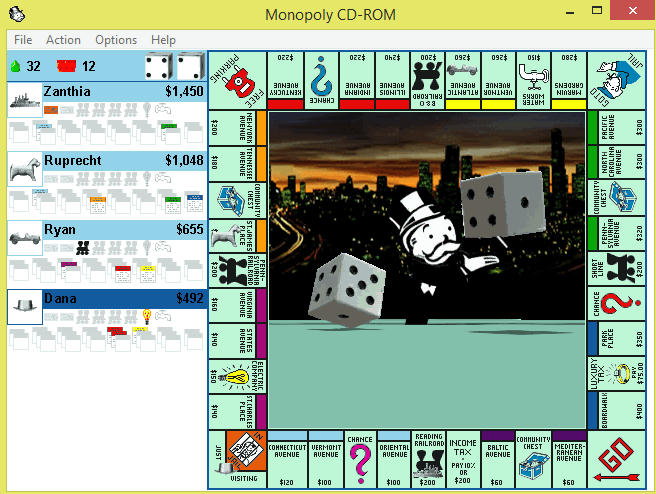 It may be because I’ve had this game ever since I was little, back when my family still had these kinds of Windows computers. Naturally, this game makes me pretty darn nostalgic. You can feel free to deny any ounce of quality this game may have due to this coming straight from my childhood, but I can assure you that there are a good chunk of reasons why this version of Monopoly is a must-play.

Okay, there are only a few reasons. If you’ve played one Monopoly game, you’ve played them all. It certainly isn’t like any of the rules are different or anything like that, although the game curiously has the option for AI opponents to cheat. 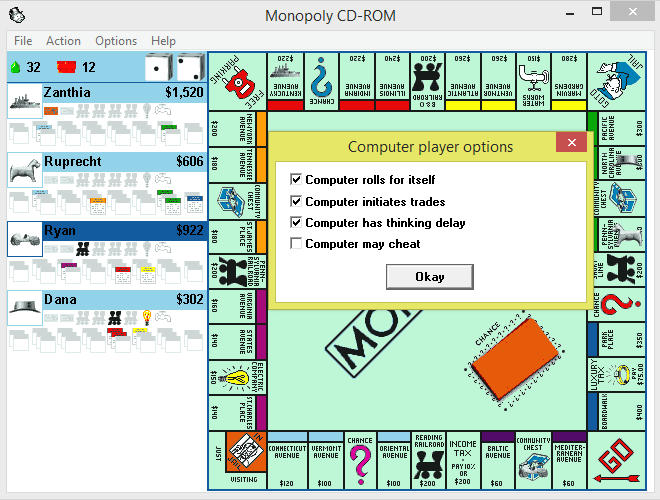 It has the usual set of options for extra rules people often like to play with. To me, what makes this take on the classic board game special is its overall presentation. I love how the game presents itself!

Everything in this game is animated with sheer cartoon-like energy. It’s so much fun watching a token dance as it is receiving property revenue, for example. What I especially adore is how each token has its own unique animations for each of the actions that take place. Even moving around the board indicates a great ton of personality, as some of the properties too have frames of animation! 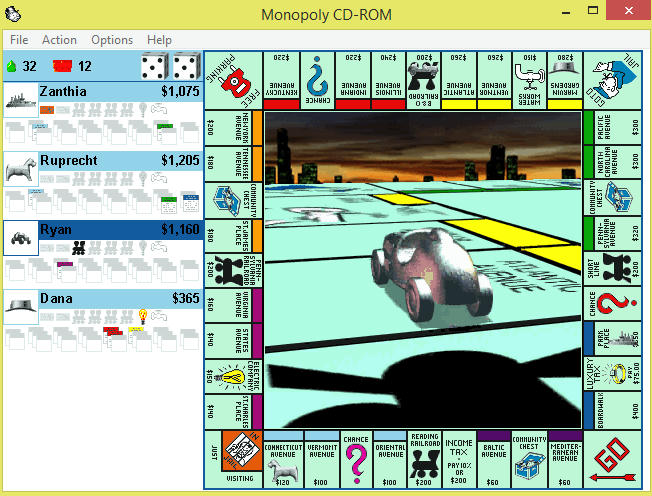 It effectively keeps the board looking alive in itself. Mr. Monopoly is also very nicely animated when he throws the dice or shakes a token’s coinage out of it. I just… I just love the looks of this game. The board and tokens by themselves are lifelike, and showing what the properties look like if a person were to visit it is a beautiful touch. 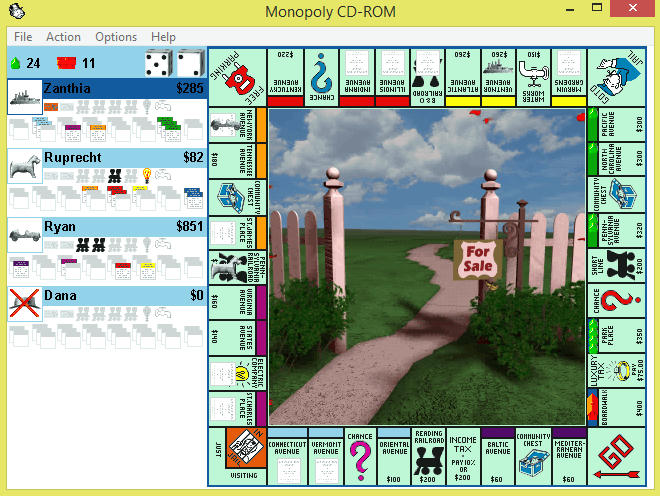 Not only are the graphics a lot of fun to look at, but the game also contains a glorious soundtrack. They consist of a plentiful batch of MIDI files. Normally, MIDIs would be seen as a bad thing this day and age. I swear these are the best MIDIs I’ve ever heard in my life, though! It’s a brilliant mix of classical and jazz tunes that fit the Monopoly name well. It also helps that the MIDI soundfont is at its best when replicating soft-sounding instruments like the piano. Please have a listen to the first piece by clicking the video below.

The game also contains a mode where players can play online, but this is 1995 we’re talking about. This had to be done through complicated means like LAN addresses and all that junk. It’s a bit of a shame. I would definitely play an online game in a heartbeat if it meant going through the simplified process we are so used to in modern times. But you know what? Being able to play this game today is a gift by itself. There are plenty of games from the Windows 95 that cease to be playable on newer computers, but this isn’t the case here! Over 20 years after it was released and it’s still perfectly playable on my Windows 8 laptop. 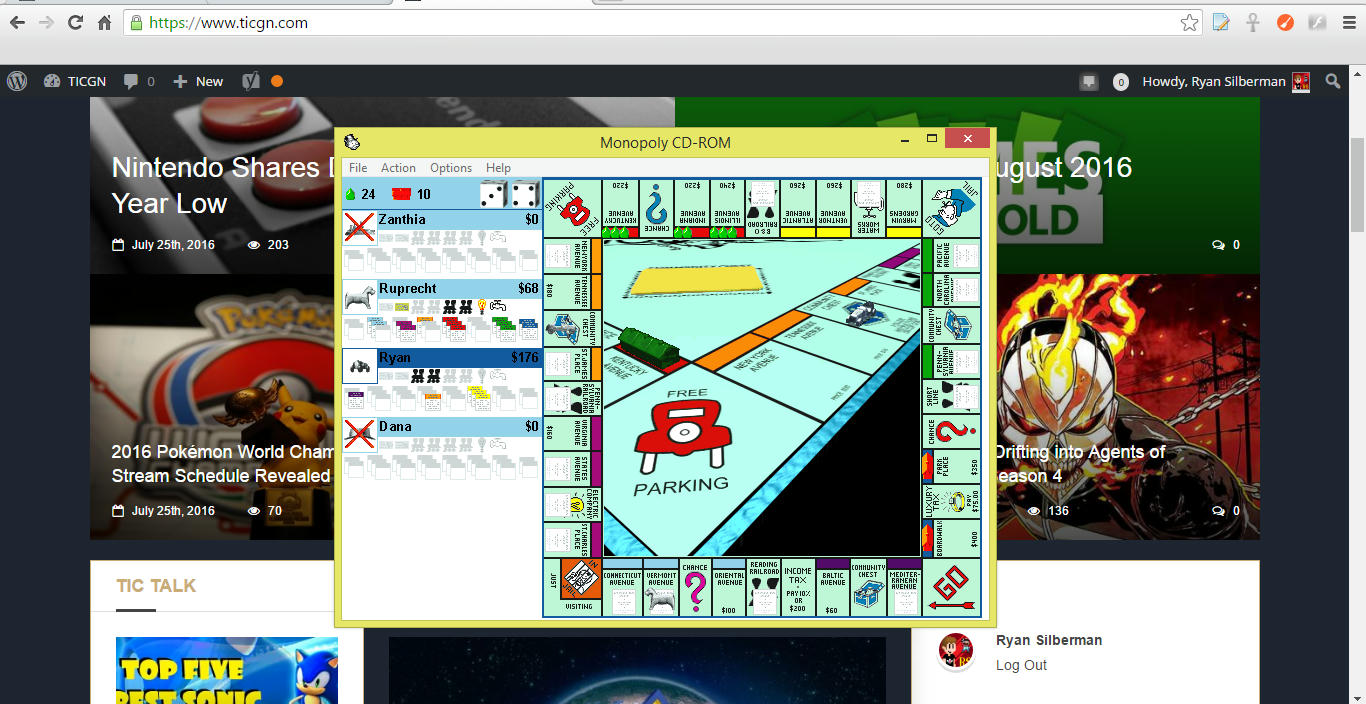 Yeah. As you could probably tell, I had been losing the whole time…

TICGN'S Comic Pickups for the month of August 2016