Now it’s obvious by this point that the Virtual Boy was by no means a success. It died out in less than a year, selling not even one million units. It didn’t help that the library of games was so small and horror stories were created in regards of it being able to severely affect a player’s eyesight when playing for long. Even Nintendo would poke fun at themselves and the failure of the system on rare occasions.

But what about the games on the Virtual Boy? Was there really anything that gamers were missing out on?

I’m not saying every game in the Virtual Boy library was to be missed. I mean, I see no reason why to revisit Golf, Virtual League Baseball, or Red Alarm; games like those either clash with the given color scheme or just look flat-out ugly.

Nevertheless, there are some interesting novelties and even a few hidden goodies that do not deserve to be overlooked by the general gaming public. The novelties include Mario’s Tennis (the very first Mario Tennis game) and Nester’s Funky Bowling (the only video game to feature the 90’s Nintendo Power mascot).

So what are those hidden goodies in particular?

Enter Mario Clash, a game that isn’t really a Super Mario platformer, but instead a unique take on the original Mario Bros. arcade game. The main hook is that Mario uses Koopa shells by flinging them at the surrounding enemies, with a lot of them requiring that the shells be flung across the screen! Pretty cool, huh? 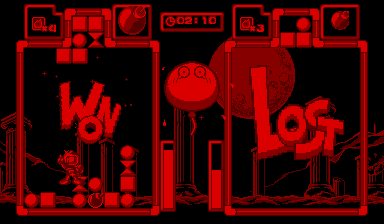 There’s also the Bomberman-themed puzzle game, Panic Bomber. It at least had previous releases on the PC Engine and Super Famicom, but this ill-fated Virtual Boy counterpart is the only time North American gamers ever got an opportunity to play it.

Of all the interesting games to be trapped with the likes of the Virtual Boy, however, there is one game that quickly comes to mind when it comes to something in need of salvaging. Games like Vertical Force, Teleroboxer, and Galactic Pinball also come to mind as games that I’d like to see brought back, but since the moment I started writing this very article, there was one game I’ve been wanting to clamor for. And that game is Virtual Boy Wario Land.

Keep in mind: The newest Wario Land game is from eight years ago. Considering how Nintendo hasn’t been doing anything with Wario’s platforming escapades since, it’d be a fantastic opportunity to bring Virtual Boy Wario Land to a wider audience. What’s even more interesting about this game is that it’s the only sequel that closely follows the mechanics of the original Wario Land.

It would be a privilege for Nintendo to bring these games back (and possibly add an optional gray-and-white graphical setting) as extra helpings for the eShop. I have no doubt these would do the Nintendo 3DS justice. The simplistic nature of these games has its merits on a portable console, after all.