Everybody knows Pac-Man, right? I mean, he is one of the most recognizable video game characters of all time, after all, and the game of the same name is one of the most successful coin-operated games ever made. However, I kinda get the troubling feeling that many people don’t really know the franchise as well as they may think. There is way more than just the 80’s arcade coin-ops and Namco Museums the series ever had to offer, and I’m not talking about the crappy cartoons, either! Being that I’m one of the biggest Pac-Fans I know, I am going to point to you a few of the many unique games the franchise has to offer!

Hello there, reader! My name is Ryan Silberman, and this is my second Top 5 list! 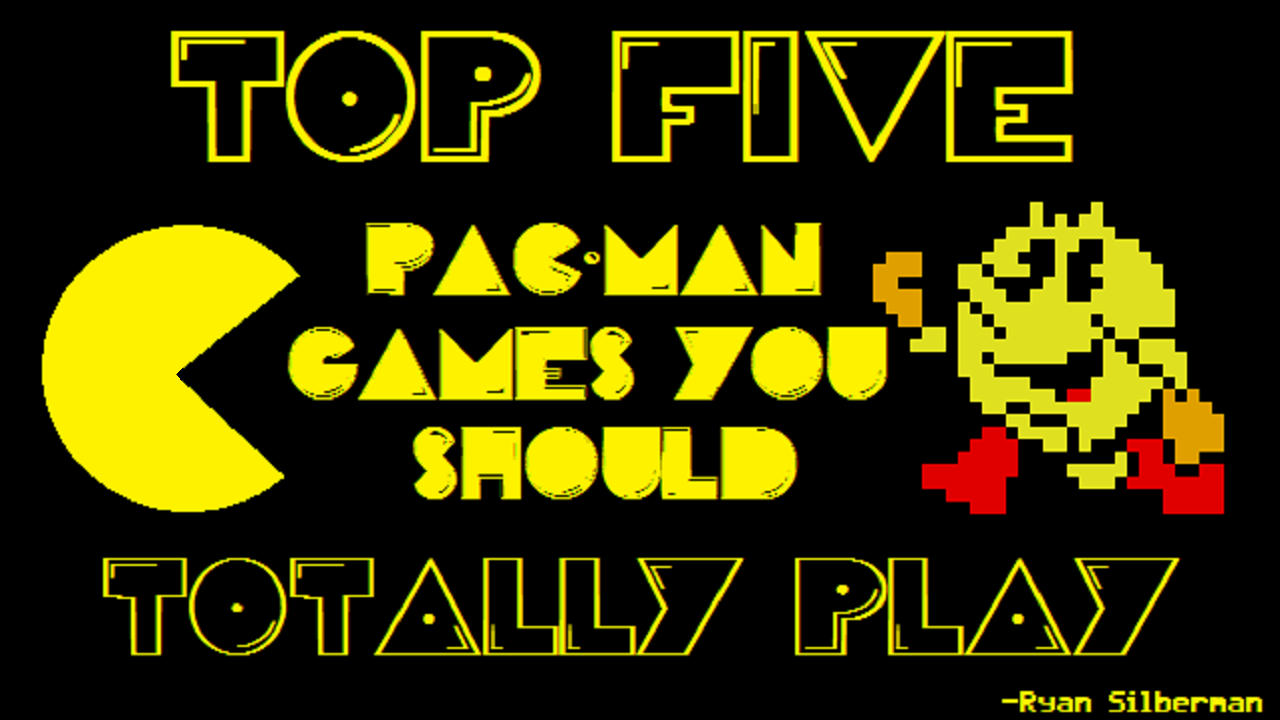 (Please note: This is not a Top 5 Pac-Man Games per se, rather is it ordered simply by how much I believe you should check them out, rather than whether or not the games are better or worse than each other)

One rather concerning feeling about the Pac-Man series as of late is that it seems to have strayed away from the depths of modern gaming. the closest it’s ever gotten to having an eighth generation console game (256 port not withstanding) is its adaptations of the Pac-Man and the Ghostly Adventures cartoon on Wii U, which I count as one of the aforementioned crappy cartoons.

However, when it comes to smartphones, it turns out the Pac-Man magic is still around! In fact, it’s almost like the series is a perfect fit thanks to its arcade qualities. Just about every mobile Pac-Man game is well worthy of playing, but the one that takes the cake is Pac-Man Friends.

This game kinda sorta builds on the foundation of the arcade formula, but enhances it in a way in which it ends up being turned into a strategic and addictive arcade-puzzler. As the Pac himself and a gang of friends in each level, you must navigate them through the maze and have them clean up all the dots, as you may expect. The process of doing that, however, is drastically different and fun in its own way. There are several types of friends that have special powers (EX: Magnetic, invisible, grow big after every dot bite, etc), and the layouts are cleverly designed so there’s a good amount of challenge to it. Stars will also be given depending on how well you’ve met the stage goals.

Basically, it’s a super-fun arcade-style game that does the Pac-Man name justice. The only problem is it can be somewhat too in-your-face with ads.

If one were to recall a version of Ms. Pac-Man on the NES, chances are he or she may be thinking of Namco’s official port, which is rather mediocre. However, in the early 90’s, Tengen was busy sticking it to Nintendo’s policy on game releases for their NES console, and they released a bunch of games and ports for it. Some of which being their own versions of Pac-Man games. Their version of Pac-Man was oddly identical to Namco’s, and they did a surprisingly faithful conversion of the late 80’s game, Pac-Mania, but the grand winner here was their take on Ms. Pac-Man!

This game. THIS. FREAKING. GAME. Oh my GOD it is wonderful! Not only did it superbly recreate the feel of the arcade game with the NES’s capabilities, but it went above and beyond and offered all sorts of ways to deliver a unique experience! You could change whether or not you want to go at regular speed or somewhat faster, change difficulty, pick from no less than three multiplayer modes (including co-op, with Pac-Man as the 2-Player character!), and even choose from various types of stage layouts! This isn’t just a port by this point; it’s a remake that borders on being classified as its own game!

Probably the best part about it is that it’s even possible to beat the game! Whereas the arcade original obviously had to be an endless high-score marathon, Tengen’s version of Ms. Pac-Man ends after beating level 32, with an “Act 4” to play out a cute little ending scene. I consider this (well, the SNES port by Williams in particular due to its perfection of the game’s graphics and sound) to be the best version of Ms. Pac-Man ever.

In 1996, Namco gave a few of their arcade classics a fresh treatment of modernization, and released a compilation arcade cabinet with a few of them. Games like Galaga and Dig Dug were made into bigger, level-based adventures that took advantage of stronger and more powerful hardware. If you were to ask me, however, I say that while they were decent games those two didn’t match the utter prowess Pac-Man‘s treatment possessed!

Extremely colorful and vibrant, filled with personality, and fast-paced and loaded with the best kinds of bells and whistles, Pac-Man Arrangement was practically Pac-Man on steroids! Much like Tengen’s handling of Ms. Pac-Man, the game has a co-op feature and a level-based format. Arrangement can be played through in perhaps less than half an hour by experienced players, but believe me: Pac-Fans will enjoy every second of what happens onscreen!

But how can people get to play this game now since the arcade cabinets have become increasingly harder and harder to find? Well luckily for us, Namco Museum for the Gamecube, Playstation 2, and Xbox includes Pac-Man (as well as Galaga and Dig Dug) Arrangement right from the get-go! Pac-Man Collection for the Game Boy Advance also has a port of it, but it omits the two-player co-op, and its music doesn’t sound quite as rad. Either way, this game is a must-play.

Raise your hand if you know what this game is. I bet not. It may be because this game isn’t created by Namco and was only ever released for Windows 98/XP; in the late 90’s and early 2000’s, Namco allowed Hasbro to license Pac-Man games for computers. This game in particular was then created by Infogrames and Creative Asylum with Hasbro’s blessing. There were also Pac-Man All-Stars and Ms. Pac-Man: Quest for the Golden Maze, but they were only good-ish and bad, respectively, which is why they aren’t getting as big of a mention as good ol’ Adventures in Time here.

Following a simplistic plot of Pac-Man going to different time periods to gather pieces of a broken artifact,  Adventures in Time is admittedly not the most creative when it comes to its level layouts, which mostly tend to be glorified edits of mazes from the arcade games, but what makes this game shine through is how much energy is presented regardless. The scenery is gorgeously animated in precious early 2000’s 3D, the music is equally charming, there’s different kinds of terrain, the ghosts have different costumes depending on the time period, there are minigames that pop up every few-to-several levels, etc.

It’s just the right kind of game anybody could expect to be made in modern times: Closely sticking with what makes the arcade games very fun to play, but adding onto it enough to make for an ultimately satisfying adventure of its own. While that does apply to other games in the franchise including a couple I already listed here on this very Top 5, there’s something extra about Adventures in Time I can’t help but smile with. The time periods all had plenty of personality and even provided some special gimmicks, and all that is added to the game does not take away the winning formula that made the arcade original such a masterpiece.

If you haven’t played this yet and own a Windows computer (even as far as Windows 8 – Not sure about Windows 10 since I haven’t tested the game on a computer with that OS) and want a fresh dose of Pac-Man action you’ve missed for so long, I totally recommend picking up this one.

Platforming is my favorite video game genre, without a doubt. And I am a huge Pac-Man fan. So take a good guess what happens when you combine the two together!

As much as I wanted to put the first Pac-Man World somewhere on the list, I feel like having to look for the Key items in each world to get to the final one (Which the lackluster GBA remake ironically fixed) kinda pushed it back a bit, in my personal opinion. Meanwhile, World 2 was pretty much the best platforming game to ever star the yellow muncher! Sure, the camera could’ve been better, and it isn’t as grand of a game as, say, Super Mario Sunshine, but this 3D Pac-o-Venture is one that I believe is arguably one that defines the era it hailed from.

Blissful and colorfully cartoon-y, World 2 has loads of fun platforming challenges that have Paccy run, jump, Rev Roll (It’s to Pac as the Spin Dash is to Sonic), flip kick, and of course, eat up ghosts at the trigger of a Power Pellet! From bouncing around in the treetops to sliding down a snow mountain, there are definitely moments to be had with this one. Heck, even when the main game is over, there’s still plenty more to do, like gather Tokens scattered and hidden around levels to unlock arcade games ranging from the original Pac-Man to 16-Bit puzzler Pac-Attack (practically making this a mini-Namco Museum)! Not only that, but Galaxian items are back with a vengeance; the first Pac-Man World had the player find these to unlock special maze levels that played similarly to the arcade games, and the mechanics in the sequel’s hidden batch of new maze levels are arcade-perfect (albeit with the appealing 3D look)!

All in all, this is a must-have. This is the game I think represents the non-arcade-cabinet side of Pac-Man just right!

E3 2016 - The Inner Circle Interviews Josh from The Culling