What the hell is Brute Force? When did it come out?  Did games really have titles like that back in the day? These might be some of the questions posed after hearing of Brute Force’s existence. It was the commercial success you never heard of and was critically well received too.

Now you’re asking what exactly is Brute Force and why I believe it should be brought back comes down to a simple notion. The game is a forgotten predecessor of third person shooters that people should try out to see how it possibly influenced games like Gears of War, Resident Evil 5, Army of Two, Crackdown and the list goes on.

Let’s take a step back and look briefly at the game’s history. Brute Force was released in 2003 exclusively for the OG Xbox. The game was originally intended for the PC back in 2000, but was soon turned into an OG Xbox exclusive title after Microsoft acquired its developer Digital Anvil.

Brute Force was a graphical showcase of the OG Xbox. Its textures and character models were second to none. It also tried to piggyback on the original Halo’s huge success. The game received a considerable amount of hype and instantly broke Xbox sales records of both its first day and week, yes even beating out our precious Halo CE.

While Brute Force is dated to modern/younger gamers (it did not have the staple Left Trigger ADS we are accustomed to) but its gameplay really stood out during its time. The game is a third person squad-based shooter where players took control of four characters: Tex, Brutus (how original!), Hawk and Flint. What made Brute Force unique is that every squad member had their own special abilities and weapons that added tactical gameplay. Tex and Brutus are better used for direct assaults, while Hawk was the stealthier character and Flint was the veteran sniper. You could switch between characters during missions via the D-pad to suit your tactical situation. Naturally, the game supported up to four player coop offline. 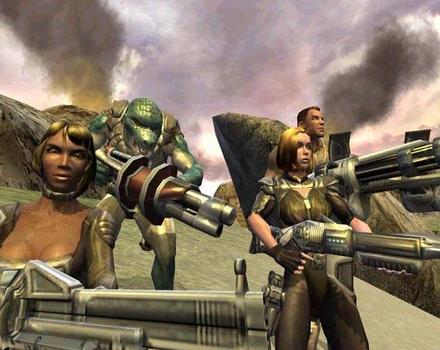 Besides Brute Force cooperative and tactical elements, there was another aspect that truly made it shine back in 2003. The AI was cutting edge.  Enemies would react dynamically to you while squad AI would support you and work together as a team. You could issue four commands to your fellow squad members, and squad AIs would smartly head for cover and sniping positions and heal themselves if they’re in a pickle.

The game took place across six planets with unique environments such a desert, swamp, volcanic planet and an alien lair. Brute Force also consisted of rinse and repeat (not sure if that was the case back in 2003) objectives such as disabling structures and mines, eliminate targets and collecting stuff.

While the game hyped its squad special ability mechanics, the final product limited their usage. Brute Force swayed heavily more on the action-oriented shoot’em up side, essentially rendering special abilities unnecessary, but using them could make levels easier.

In the end, Brute Force is the unsung hero of today’s third person shooters. Now I won’t go as far and advocate for a sequel, the game does feature some cheesiness after all, but its commercial and critical success warrants a remaster with Xbox Live support, so gamers can truly appreciate its influence on modern gaming. Check out some gameplay footage below.

Ratchet and Clank The Movie