Super Hydorah is the remastered and extended version of Hydorah which was a freeware, side scrolling, shoot ’em up game released by Locomalito back in March 6th of 2010 for Windows. If for some reason you have an old school shmup (shoot-em up) itch that needs scratching, then by all means Super Hydorah is what you’re looking for – especially if you miss the difficulty and addictive game play of Gradius.

The story is fairly straightforward. You are part of Delta Lance and need to repel the invading Meroptian forces. You- or you and a buddy – must battle through some intense, diverse levels and boss fights. Super Hydorah also sports multiple endings to the story, none of which I will spoil for you.

Nothing to shout out over the rooftops here but it’s a solid player in the 16-32 bit era. It’s crisp and the colors are vibrant(and sometimes distracting). Everything runs smoothly and I never encountered any kind of frame rate issues while playing on the Switch.

Before starting the game you can choose either “rookie” or “pilot” for difficulty settings. Rookie gets a 3 hit shield around you while Pilot is a one hit only mode. The controls are smooth and fairly tight. I have to admit I took some issue that the ship doesn’t seem as agile as it should be for some of the maneuvers you have to undertake through a lot of the levels but it can be done, just not by me apparently. Aside from a diverse pool of enemies to gun down both in air, ceiling and ground the levels themselves offer their own unique dangers. Many of times I was doing so well only to try to escape an enemies attack to slam my plane into the environment itself.

There are a lot of “cheap” deaths in this game so get accustomed to seeing the “Continue” screen. Continuing only resets your score and starts you back at the level select screen. Dying before you reach the boss results in just starting the stage over while dying during the boss fight starts you back at the beginning of the boss battle. Each death has a penalty to the level-ups you’ve earned through the level itself. So, if you start the boss fight with double blasters you’ll get knocked down a peg back to a single blaster for example.

Quite a few of the levels have branching paths and the level selection itself has a few branching paths to follow. Within these levels are certain objects you can destroy that will drop these little orbs that switch from green to red. Green will level up your primary weapon while red will level up your secondary weapon. There are other enemies you can kill in the levels that drop a spinning orb that will either give you ammo for your special weapon or a special power-up like an extra shield. It’s also worth mentioning that there is a secret in every level to uncover as well.

Before the start of each level you get to choose your load out and this gives Super Hydorah players a little wiggle room with how to approach these levels. Most levels take only minutes to complete(If you’re good enough), while there are a few missions that have multiple layers to them before you reach the end and the proper end level boss fight begins. Once there you have to figure out their pattern quick or you’ll be restarting the battle before you know it. Defeating these bosses grants you a new weapon or special item you can use for further levels or sometimes an extra ship (extra life).

Super Hydorah is not for everyone. It’s sheer level of skill that is required to pass each level will turn anyone off from this game who isn’t a fan of shoot ’em ups no matter how addicting the game play is. However, due to how smooth it runs, how well it looks, the diversity of the levels and enemies, the multiple endings and different weapons you can choose from ultimately gives shmup fans a more worthy title to explore. 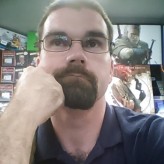 35 year old gamer. Father of one, got a wife around here somewhere too. Haha. I've been gaming since '88. I feel I've reached some weird "Old Gamer" paradigm in my life where I usually only end up playing for a few hours of out the day, and if people didn't know better, they'd probably call me a filthy casual. I'm more of a grizzled veteran who has been there and done that and nothing really has the wow factor it once did. RPG's are my jam, Western RPG's mainly. I like a good JRPG too though. Might fight you over Fallout.