I really wanted to have this review out earlier but I was both pleasantly surprised and shocked with what Laser Disco Defenders has to offer. Simply put, this game has a high learning curve. You’ll find out more about why that is in the Gameplay section below. For now, let’s have a look at the whole package of the latest PSN offering.

One thing I can easily say from the get-go is that there’s an appealing foundation set to the game. Let’s be real here, a title like “Laser Disco Defenders” could only make for an intriguing premise. What I love about the execution is that the art style is deliciously stylistic. The kind of art style one can expect from games like Guacamelee or a modern Rayman game. The caves presented in the game have a simple look to them but when the lasers kick in the game becomes more like an interactive light show. Lasers of your character’s color will bounce around and the screen visually vibrates when an enemy is attacked. If your eyes can keep up, you’ll find yourself with a graphically energetic playing field.

Who says disco is dead? Laser Disco Defenders doesn’t have a lot of different musical pieces throughout the game but the few musical offerings included in the game pack a punch. The musical scores enhance the space-shooting with melodies that make your ears dance. The sound effects on the other hand embody the conveyance of an arcade-style video game. Despite not completely sounding 8-Bit, the sound effect wouldn’t be out of place from an actual arcade cabinet.

If the old-school nods didn’t give you a retro feel already tackling the controls certainly will. This game is a pure twin-stick arcade-shooter. Think Robotron or Smash TV. The trick here is that every laser you shoot will bounce off the walls. Tripper-happy players may get thrown off quickly. Many players will be surprised by what’s to come. Even the more careful players will need to keep their eyes open when realizing that there is a distinctive learning curve to handling firepower. 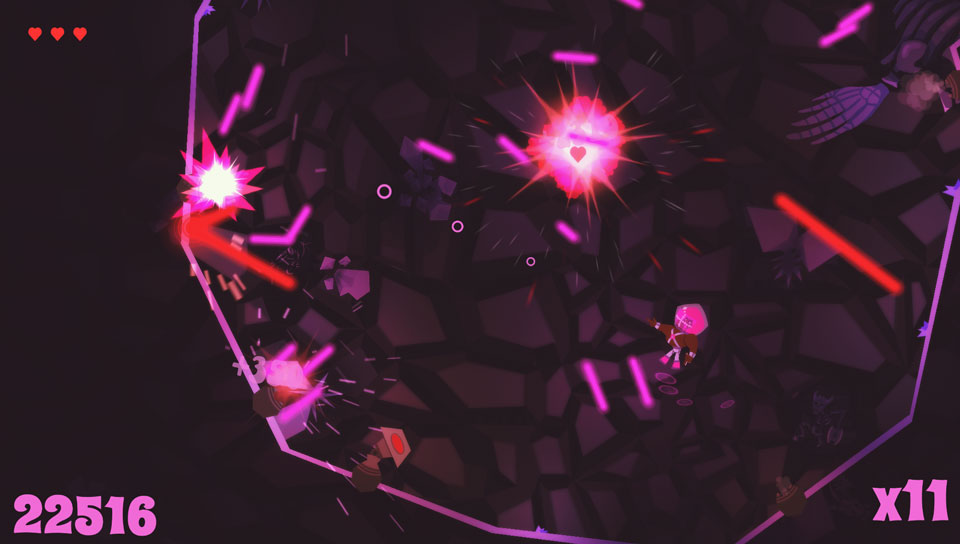 The Story mode for Laser Disco Defenders is like that of an arcade game. On paper, it has a series of levels that can be beaten in not even half an hour. Like old-school arcade quarter machine, the game doesn’t save progress in the campaign. In actuality, the game will find ways to keep you on your toes should you not want your quarters wasted! Okay, so this is a PS Vita game rather than a real arcade game but the idea of the game’s challenge is still there. Not only do you have to learn how to fire your lasers wisely, you must also learn the behaviors of enemy types that could be big threats if you aren’t cautious. Get too careless and you can expect to have to restart the Story mode from stage one.

My experience with this game has been an almost obsessive one. I kept trying over and over to beat the Story mode. That’s why it took until now for this review to been written. I had my butt kicked so many times and I kept crawling back for more. But you know what? I wear the mental scars proudly. While my excitement was overblown when I finally got to see the ending, the journey itself was an addictive one that I am happy to hold dearly.

It’s the small rewards that matter as well. There are character upgrades and achievements that can be earned as you keep at it. The rewards provide good options to convince players to keep coming back. The best incentive for replay value is the game’s unlockable Endless mode. This is where online Leaderboards kick in. Who doesn’t love a highscore competitive environment from across the internet?

This game is hard. The challenge is more upfront and center than I initially thought it would be. Laser Disco Defenders is the tasteful kind of challenge that old-school videos games offered. It’s the kind of game where you keep taking in what you learn in order to do better. It keeps you on your toes and sharpens your reflexes. It may be a stretch to call this game the next Contra (aside from the fact that I still can’t beat that game normally), but I’ve had a lot of fun trying to best the Story mode and I think the extra content the game has to offer is ripe with replay potential. In the future I would totally like to come back and play through it again.