Good mooring ladies and gentlemen. Today I’m going to share my opinions about Invincible Iron Man Volume 2 which collects the story arc “The War Machine” and consists of issues 7-11. In this review we will break down the story, art, and character development. There will be no spoilers for this volume. Let’s begin.

For the sake of saving time, instead of giving you lovely ladies and gentlemen a detailed description of the first issue of Invincible Iron Man Volume 2 The War Machines.  I will provide you with the synopsis of the volume that can be found on Amazon.com or Comixology.

Something is rotten in the house of Stark, and Tony must delve into the nooks and crannies of his international organization to root out the answers. But what will he find? Meanwhile, as events begin to build that will rock the Marvel Universe once again, Iron Man will team with War Machine to face a brand-new threat – with a little help from Spider-Man! Tony and Rhodey are best pals on and off the battlefield, but their friendship will be tested beyond anything they’ve ever known as new power players reveal themselves in a bloody and dangerous fashion. Can Iron Man or War Machine do anything to prevent an all-new Civil War?

I feel like this story arc was better than the last arc. The story was more interesting this time around. It had more hand to hand combat scenes with the biohack ninjas from the last story arc. We learned who the mystery behind the biohack ninjas and their true intentions. The issue also introduces us to two new characters, Riri Williams and Tomoe.

This story arc is good but it has three problems that we need to address. First and for most, in issue 6 page 20, two Japanese women call War Machine a sexist for not seeing them as a threat. The problem with that is Rhodey was after the inhuman not them. That dialog felt forced and out of place. Secondly, the ending of Invincible Iron Man issue #9 never got explained. Instead the story was fast forwarded by four weeks. This would be fine if the book would elaborate on what happened during that time frame but the story picked up with Tony Stark going undercover to find out more info on Tomoe.

As fans of Invincible Iron Man may have noticed, a big art change starting with Invincible Iron Man issue 7.  So much so that we got two new artists working on this title now. This change in art was caused when David Marquez and Justin Ponsor began working on Civil War 2. The gentlemen that did the artwork for this volume was Mike Deodato and Frank Martin. Mike Deodato did the art and Frank Martin did the coloring.

Mike did a good job drawing the characters and the environments surrounding them. There were three things that I loved about Mr. Deodato’s art and one thing that I really didn’t understand. I loved the way Spider-Man’s web looked. Spider-Man’s web had knots drawn in every few inches. The knots looked like they added extra support to Spider-Man’s webbing. I loved the art when Spider-Man, War Machine, and Iron Man were fighting Tomoe. More specifically, it was visually pleasing when she used her superpower to take parts of War Machine’s and Iron Man’s suits. Than she uses all the parts to build a Mecha suit to destroy Tony Stark. That panel looked so awesome. The thing that I don’t understand about Mike’s artwork is Tony Stark’s design. In this story arc of Invincible Iron Man, Tony Stark is drawn as having shaggy hair and a thick beard that don’t match up to any other stories that involved him. Stories such as Civil War 2, All-New All-Different Avengers, and International Iron Man where he is drawn with short hair and a small goatee. It looks out of place.

Moving on, first of lets just say that Frank Martin’s coloring isn’t bad but it isn’t good either. If you would kindly look above you can see that there are four pictures. Two are of Iron Man taking off, the other two are combat panels. Let’s look at the first and second picture. Like I said these pictures are of the same thing but different coloring. In the 1st and 3rd picture the colors are vibrant and crystal clear. Compare that to the second picture that uses dark colors and has a yellowish tint to it. This style of shading makes the colors feel dull. 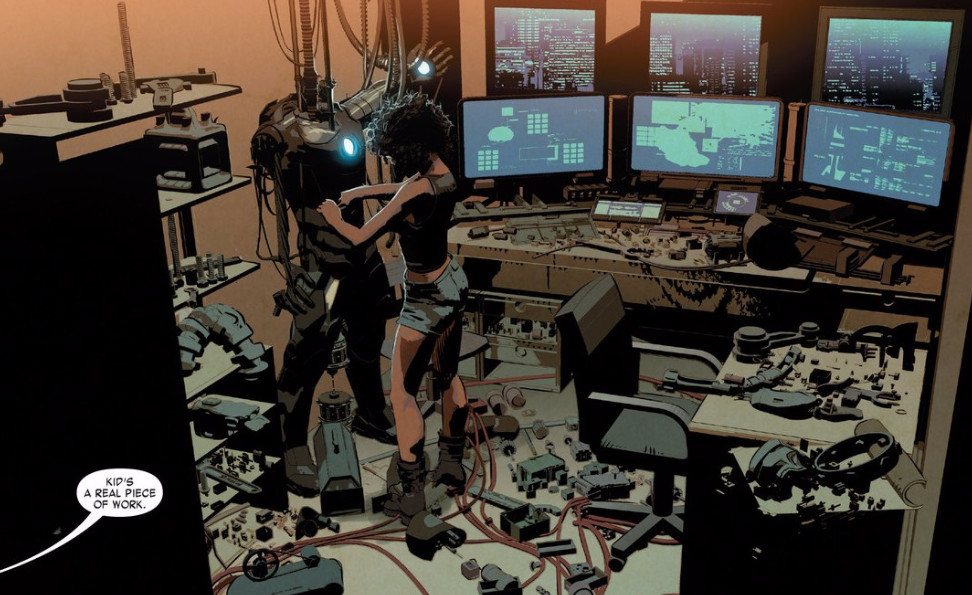 Even though this volume did introduce us to two new characters that have interesting back stories, I feel as if other characters didn’t get enough character development.

Iron Man – In this story, Tony Stark recognizes that his personal life is a mess and that’s why he hires Mary Jane to help make him less of a “hot mess”. You will see War Machine and Ironman’s friendship grow as they try to protect each other from Tomoe. This aspect of the story made me sad because of Civil War 2.

Amara Perera – Amara doesn’t get much character development, instead we get a glimpse of her brilliance. When she and Tony goes out on a date Tony asks about how Amara’s work. She tells him that she had managed to reverse some effects of Alzheimer disease by using magnetic resonance. Which leads to improvement of Incognition and spatial learning in transgenic mice.

Tomoe – Tomoe refers to her self as the “Techno Golem”. This is because her power allows her to take control of any and all technology and make it a part of herself for a limited time. She was a helpless woman before she was transformed by the Terrgin Mist. Than he started using her power to protect Tokyo from evil forces like A.I.M, Hydra, and The Brothood of Mutant. We don’t know why Tomoe turned evil or how she gained control of a Army of biohack Ninjas

Riri Williams-  Believe or not, Riri was set up in the very first issue. Something that many people overlooked. This is backed up by Tony’s monologue in Issue 1 page 10.

Some 15 year-old at M.I.T reverse engineers it (He is referring to his suit by “it”) on a dare and posts it online.

Riri Williams was a M.I.T college student until she started stealing random parts of metal to make her very on Ironman suit. She reversed engineered one of Iron Man’s old suits and added her on spin on it. We see her fly and start to help people.

Honorable Mentions-  There were many other supporting characters that had many lines of dialogue in this arc but they had little to no character development. War Machine was  present, but mainly Iron Man’s lapdog. Mary Jane was a big part of Issue 8. Victor Von Doom was present a couple times, but only to tell Amara to start human testing and to check in on Iron Man  to make sure he’s ok. Spider-Man helps Tony finds his way around Tokyo, but that is all he is used for.

Where can I get it

Paperback – Unfortunately I can’t seem to find the paperback copy of Invincible Iron Man volume 2. I’m sure there’s a option to purchase this in a paperback form you’ll just have to look for it. Sorry I couldn’t be more of assistance.

Digitally- you can get the digital copy on Comixology on the day or the week of the release for the physical copy.

Local – If you have a local comic book Shop that you buy from. Ask your vendor if he or she can order you this volume. I’m sure they would be more than happy to help you fulfill your order.

This is a good book with a good story that has a few plot holes. It introduces us to two new characters that have  in-depth personalities. The artwork is mediocre, but it gets the job done. There are few characters that get character development, the few that do get development are great. The hand to hand combat in this book is extremely well drawn and extremely enjoyable. I recommend this book as a day one buy if you are a hardcore Iron Man fan. If you are a casual fan, I’d wait for a sale on the digital store, Comixology.

If you read single issues what did you think  about this story arc ? How did you like Riri Williams and Tomoe characterization? Are you excited for Riri Williams’s character progression? Let us know in the comment section below.