As much as I hate to admit it, I don’t really have any idea how I want to write an intro that properly transitions to today’s review. So we’re probably going to have to get straight to it – Here’s my review on this interesting little upcoming Steam title, Doodler! It’s a bit hard for me to elaborate on certain categories for the game, but nevertheless, here is my overall opinion of the title.

Appropriately enough, Doodler features the kind of aesthetics one can expect from drawings. They are somewhat bare when it comes to analyzing the objects themselves, but there is a visible appeal to the overall visual style. At best, they look somewhat like that of Super Paper Mario or some games on smartphones. Maybe at worst, they could use some more pizzazz.

Maybe the graphics are to complement the audio department, because the mood conveyed from both sides together is relaxing. The sound effects are simple and easy on the ears, and the music is calm even when the theme is different. And since the game has a drawing aesthetic to it, it works finely.

Oddly, the Story mode has no story in it. I’m not complaining per se, it does seem odd to call it a Story mode; it could be labeled as “Missions” or have even an excuse plot to it to justify the name. 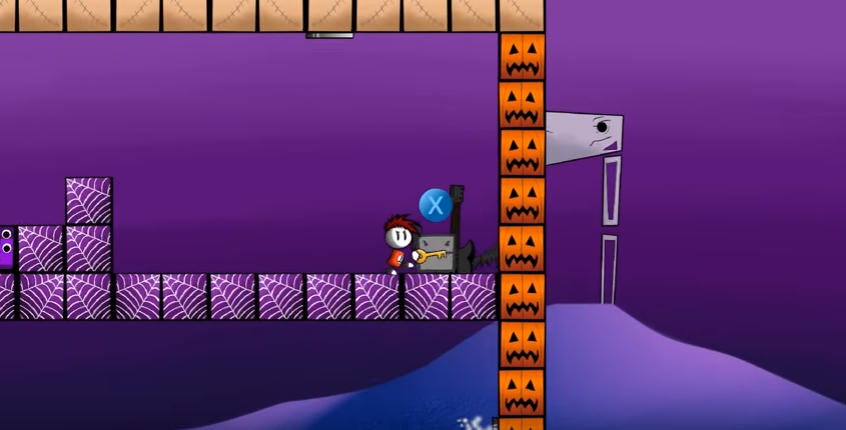 Regardless, Doodler is a puzzle-platformer where you control a limbless hero (not unlike that of Rayman) through four worlds that contain over twenty-something levels in each. The levels are the bite-sized kind that present a series of obstacles in a confined layout that’s simple to grasp and straightforward to navigate around. As Mr. Limbless, the player has to jump, collect keys to open locks, push rocks onto pressure pads, pull levers, and whatever else is necessary to traverse the stage.

The existing levels that there are in the game are easier to breeze through than the likes of, say, Super Meat Boy or In Between, but I would be lying if I said the levels weren’t fun to play anyway. There is an addictive vibe to the simplistic nature of the game, and although the Story mode may only last a couple hours, the amount of content is easily expandable through means of the Map Editor. This is where things can get Super Mario Maker-like.

I say “Super Mario Maker” because the editor is actually really intuitive; I don’t know if it’s because I frequently use Game Maker, but the method of creating your very own stage seems nicely streamlined and accessible. For example, all one has to do to make a lever or pressure pad work is by clicking on the tiles they should affect, and selecting the speed or direction they would go. Selecting tiles to place is a non-issue as well, since the player can just click on what kind and proceed to click on parts of the layout to utilize.

And yes, the levels can be uploaded and shared – Via Steam’s workshop feature that is.

Obviously, at the time of this writing, there isn’t much content uploaded online. I already made a level, but others available seem to be from the developers themselves. But hey. This could change if people buy the game when it comes out. And I do recommend it.

Doodler is an easygoing game for its genre, but it is robust and carries a hefty stage editor to boot. Without the editor, it’s a decent puzzler that is enjoyable to stroll through; even if the player doesn’t necessarily need to think too hardly about the puzzles on display, they still demonstrate a sense of cleverness. With the editor, it’s ripe with potential for a surplus of user-made stages with unique challenges of their own. It can even be exciting just making the stages! All in all, check this game out when it arrives onto Steam!