It’s hard to imagine what the gaming industry would be like without the Street Fighter series, what with Street Fighter II being the most revolutionary fighting game ever created and all that, but doesn’t it seem somewhat odd to realize that nobody ever discusses its predecessor? Surely, the II in the title wasn’t there just for decoration; the game had to be an actual sequel to an existing Street Fighter that came around before it! For those that ended up discovering the truth (whether they are finding the game themselves or seeing that one Angry Video Game Nerd review), however, they were in for a truly nasty surprise.

The game is one big pile of doggy doo!

You can only play as Ryu (or Ken as the second player), the AI feels unnatural and clunky, and the fighting control is some of the most abysmal in the genre to date. Ryu/Ken can only jump either straight or in an awkward arc, and while punches and kicks are there, the chances of doing special moves are practically based on pure luck as you frantically mash every button and combination imaginable! Each battle is an endurance test of despicable AI practices and wrangling the joystick and buttons to try and get Hadokens, Shoryukens, or Hurricane Kicks to activate.

And yet, when you do manage to pull off a special move, you feel like the freaking man (or woman, depending)! While there are countless frustrations from executing the darn things, the results can chop off the grand majority, if not all, of an opponent’s health in less than two seconds! When I finally figured how to mess with the button schemes in a particular fashion, I was busy making the opponents feel like Goombas in a typical Mario game! That is, until you approach the later stages, where fights like Sagat’s become an immediate death wish. 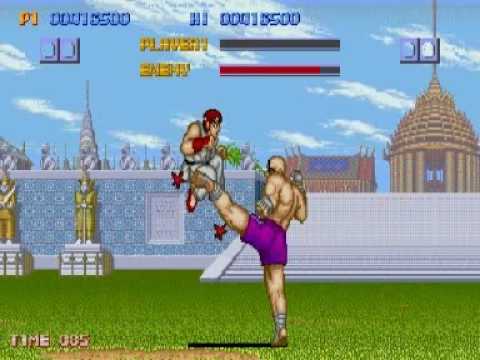 This was the 1980’s after all, meaning all later stages have to be impossible for human hands to triumph over under a single coin inserted into the arcade machine. It probably works out, though, because the music is absolute crap in Sagat’s arena, and by then your hands would be absolutely destroyed. Well, and Street Fighter is just one big cabinet-sized piece of garbage. The graphics are iffy, the music is trash, the voice clips are laughably bad, and the gameplay is a travesty. It’s a miracle to see how Capcom went from this abomination to one of the greatest fighters of all time.