It’s always an honor to be able to look at a game that may catch some attention with its pixelated graphics. There’s something about the retro charm that never ceases to amaze me at a pleasant degree. Today’s game in question is Starr Mazer DSP. It is a 2D shooter that heavily shows inspiration of action-packed auto-scrollers like Gradius and R-Type. The game is in Early Access, which I admittedly and generally am not fond of. However, what is there of the game seems practically as if the game was already done and ready for official release.

There is a heck of a lot to enjoy about Starr Mazer DSP if you’re a hardcore fan of games in this genre. Enemies are at a great variety and move around the screen in seamless patterns. Sprites and backgrounds are absolutely energetic, detailed, and flowing. The soundtrack has a CD-quality like vibe that keeps things pumping with entertaining (and slightly muffled) voice tracks that add to the overall personality of the game. Starr Mazer also plays pretty darn well, the controls are as responsive as expected from a space shooter game. The levels have a lot going on to keep players engaged and cautious for anything.

By cautious I mean there’s a lot of ways to die. 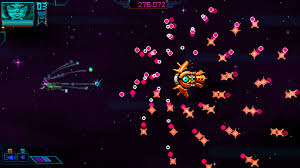 I want to love Starr Mazer DSP, but frankly I’m interrupted by the constant hoops I have to go through to keep my satisfaction steady. You’re supposed to use your points to buy pilots that are either of a bigger quantity or kick more butt that the ones you used before. The only way to get to spend your points is if you’ve gotten a Game Over and need more lives to utilize. There’s no save feature either. At least not technically speaking; the game is split into Acts. So you’re meant to beat the batch of levels in the first Act to get to select the second from the title menu. Unfortunately, I’ve only ever been losing all my men and women beforehand!

As fun as the gameplay itself is, the player is extremely fragile. The best pilots can take maybe three hits at most, while the worst die instantly upon collision with a hazard or enemy. And you’re expected to have at least one pilot alive throughout the duration of an entire Act. Keep in mind that you can’t refill your quantity of pilots or save your game in between levels. Another thing that bothers me a lot is that booting up the game directs you to a loading screen that lasts at least a few minutes! If games like Freedom Planet can load just about immediately, then what’s Starr Mazer‘s issue??

All things considered, there is a great game to be had here. What sucks is that there is a catch to it. At least for now. Since this game is in Early Access, I’m hoping that the developers alleviate the extreme difficulty (or provide options), add save features, opportunities to purchase pilots in between levels, and reduce the boot-up loading time to mere seconds instead of minutes. If those things get fixed, then I’d be more than happy to hop back in the driver’s seat and get back meowt there. Let us know how you feel about this game in the comment section below.