July’s NPD’s are here, as always thanks to Mat Piscatella and the NPD group for the sales information and data. Let’s get right into the meat of it with hardware sales.

Nintendo dominated the top 10 best selling games of July with a whopping 6 titles on the list. With Fire Emblem: Three Houses, Super Mario Maker 2, Super Smash Bros Ultimate, Mario Kart 8, Marvel Ultimate Alliance 3: Black Order, and The Legend of Zelda: Breath of The Wild all finding big success this month. Madden 20 was the best selling game of July, and shot up to the 8th best selling game this year. This marks the 20th consecutive year that a Madden NFL franchise game has been the best selling title of its release month.  Madden continues to be a cash cow for Electronic Arts and will continue to be for the rest of the year no doubt. With that being said here are the top 20 best selling games in July. 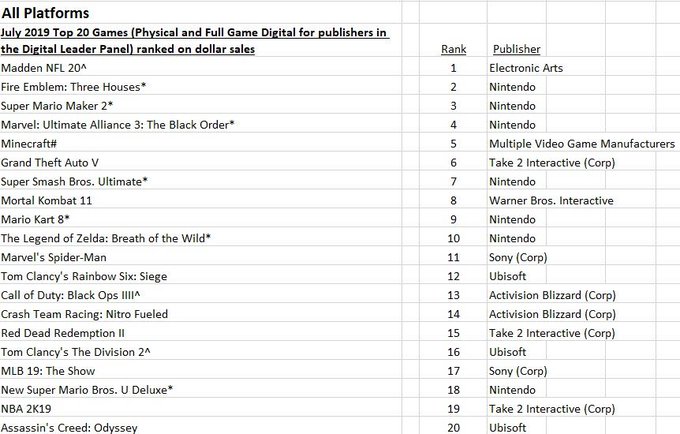 For the year of 2019 Mortal Kombat 11 remains king as the best selling video of 2019, and has officially become the 5th best selling fighting game in history.

There is no doubt that Nintendo has dominated these summer months in sales. With the upcoming Switch Lite, and blockbuster titles such as Luigi’s Mansion 3, and Pokemon Sword and Shield. It feels almost safe to say that Nintendo has the remainder of the year on lockdown.

Gamer, of 20+ years experience, started on PC and now I game on everything! Proud father of two, and an avid fan of RPG's. View more posts