An old school favorite Inuyasha anime will be making a return this fall with a brand new spin-off. The title of the spin-off will be Yashahime: Princess Half-Demon. The original series by Takahashi launched back in 1996 and ended back in 2008. Along with the announcement of the spin-off we also get a look at the new characters that will be in the series that you can see below. 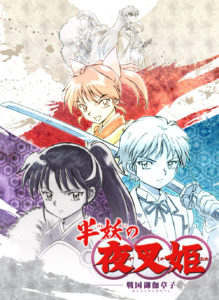 So what exactly will the new spinoff be about? Well, Viz Media has shed some light with a synopsis: “The daughters of Sesshomaru and Inuyasha set out on a journey transcending time! In Feudal Japan, Half-Demon twins Towa and Setsuna are separated from each other during a forest fire. While desperately searching for her younger sister, Towa wanders into a mysterious tunnel that sends her into present-day Japan, where she is found and raised by Kagome Higurashi’s brother, Sota, and his family. Ten years later, the tunnel that connects the two eras has reopened, allowing Towa to be reunited with Setsuna, who is now a Demon Slayer working for Kohaku. But to Towa’s shock, Setsuna appears to have lost all memories of her older sister. Joined by Moroha, the daughter of Inuyasha and Kagome, the three young women travel between the two eras on an adventure to regain their missing past.”

Will you be checking out the Inuyasha spin-off Yashahime: Princess Half-Demon this Fall? Let us know in the comment section below.

Just a Guy who loves Anime and Video Games

Tower of God English Dub Coming To Crunchyroll May 13th